At the mouth of Honolulu Harbor, looking out to the Pacific Ocean, an odd-looking boat is on a mission. Built by a multi-talented coterie of enthusiastic engineers, it’s in a race to see if it can conquer this unique competition all on its own.

While we hear about autopiloted cars and planes most often, advancements in autonomous vehicle technology has spread across all domains and terrains. Rolls-Royce and Finland just demonstrated the first autonomous ferry. In fact, self-piloting seacraft are moving fast in public and private sectors. And nowhere are they moving faster than academic research and competitions.

In support of this work, the Office of Naval Research (ONR) launched the first biennial Maritime RobotX Challenge in 2012. Today, RobotX is the premier unmanned systems competition in the world and one of the most complex robotic competitions anywhere. Student teams from around the world are asked to design, engineer, and build a fully autonomous maritime vehicle to complete a series of difficult tasks.

The event is hosted by the Association for Unmanned Vehicle Systems International (AUVSI), the world’s largest non-profit organization dedicated to the advancement of unmanned systems and robotics. It represents corporations, universities, governments, and professionals from more than 60 countries. 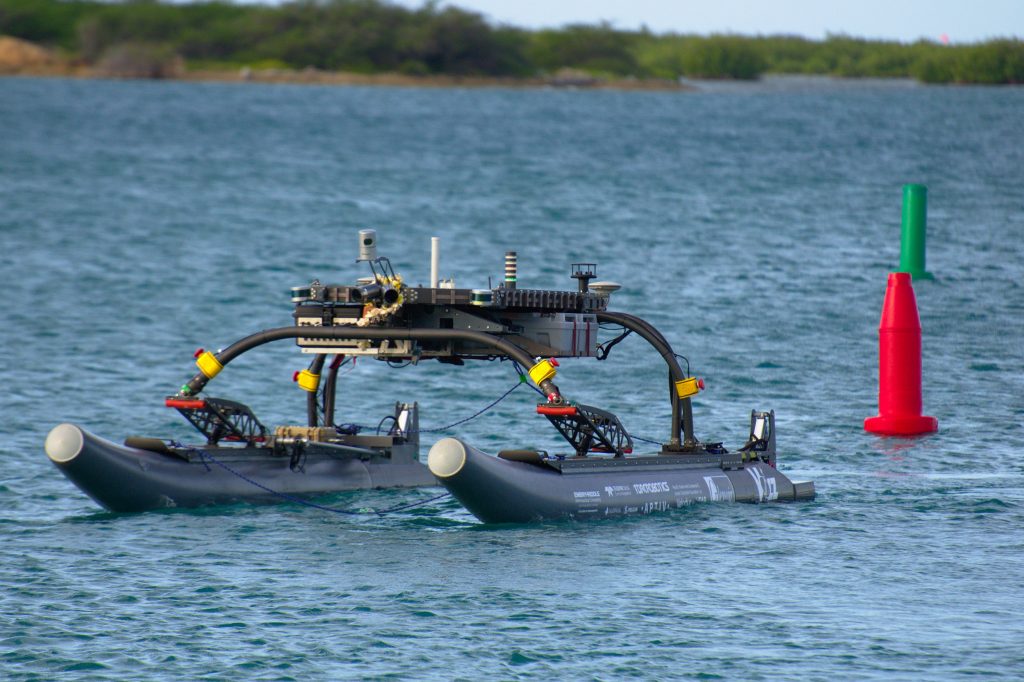 The Maritime Robot X Challenge, a weeklong biennial international competition co-sponsored by the Office of Naval Research (ONR), the Association of Unmanned Vehicles International (AUVSI)’s RoboNation and NAVATEK, a Hawaii-based company that designs ships and other amphibious vehicles.

The competition’s primary goal is to increase student interest in autonomous robotic systems operating in the maritime domain. Emphasis is placed on systems engineering and the science and engineering of autonomy. The Maritime RobotX Challenge will stimulate innovative approaches to autonomous sensing, on-board decision-making, and mission implementation. It will promote international endeavors in science and technology among the Pacific region communities.

The third Maritime RobotX Challenge took place in December 2018 in Hawaii. Teams started with pontoon boats built on identical 16 ft. long Wave Adaptive Modular Vessel platforms. Each team would then turn this platform into an Autonomous Maritime System (AMS) that could perform a series of increasingly complex maritime-related tasks, all without human or computer interaction.

1-Entrance and Exit Gates
A set of three gates will be located in the course area with a beacon placed underwater within each gate. The AMS must detect the active underwater beacon and transit through the gate in which the active beacon is located.

2-Obstacle avoidance
For this challenge an obstacle field will be marked by four white buoys (listed in Table 3) around an area approximately 40m x 40m. The AMS must transit across the field without striking an obstacle.

3-Find Totems
The AMS must locate and completely circle distinct objects, representing traditional Hawaiian Tiki totems. To successfully circle the totem, the AMS must transit around the totem until it has crossed its approach path, transiting at least 360 degrees.

4-Scan the Code
The AMS is required to observe a light sequence displayed by an RGB buoy and report the color pattern.

5-Identification and docking
The AMS must demonstrate the ability to successfully dock in bays identified by a symbol. The symbols may be red, green, or blue in color and may be in the shape of a circle, triangle, or cruciform on a white background.

6-Detect and Deliver
The AMS must propel or insert objects through the target holes mounted on a floating platform. A symbol is designated on the day of the competition requiring image recognition: red, green, or blue shapes that could be a circle, triangle, or cruciform on a white background.

7-Ring Recovery
The AMS must recover rings suspended underwater in the competition field. The rings were attached at varying depths to a PVC structure suspended underneath a marker buoy on the water’s surface.

The team leveraged its experience as the only university group in the world to participate in all of the major unmanned system collegiate competitions including repeated top 5 finishes, and 1st place at Roboboat in 2014 and 2015, and was returning as one of the top competitors in RobotX.

Bob Melvin, Vice President of Engineering for Teledyne Marine Vehicles, was impressed with their solution:

“Their design is a well-built system with modular payloads that can perform many jobs. They used our four hydrophones to sense underwater acoustics over a broad spectrum to find targets and calculate direction. Hands-on experience with the technologies is enormously valuable – we see them used for anything from marine mammal monitoring to black box pinger location – stories you see regularly in the news. Teledyne Marine was proud to assist Team Minion with the building blocks of an acoustic hydrophone array for their WAM-V platform.”

They received numerous compliments from the competition judges about the quality and professionalism of their system, which was partly thanks to their great team of partners, and partly due to their attitude. “Many of the competition judges from the ONR, industry and academia let us know how impressed they were with our boat’s systems and with our team,” said Dr. Eric Coyle, one of four faculty advisors for Team Minion. “Our students were also recognized several times throughout the week of competition for helping other teams with technical and equipment issues.”

The team finished third overall, besting international teams from China, Japan, Taiwan, Australia and Singapore and was the highest scoring team of the seven universities from the U.S. The National University of Singapore took this year’s top prize, while Australia’s Queensland University of Technology placed second.

The Robotics Association at Embry-Riddle (RAER) draws from a large student body of all experience levels (middle school through PhD) and disciplines.

Embry-Riddle is one of the few schools in the world to compete at such a technologically advanced level in the Maritime Robot X Challenge and in other international autonomous vehicle events, such as the Roboboat and RoboSub collegiate competitions. Building on the team’s success at past competitions is one of the reasons the Office of Naval Research awarded Embry-Riddle a five-year, $900,000 research grant in 2017 to continue developing advanced communication, perception and energy systems for unmanned surface vessels.

“Minion is an outstanding platform for applying our research into autonomous systems toward real-world applications,” said David Thompson, team lead and Ph.D. candidate in Mechanical Engineering. “For many of our undergrads, working on Minion for the past two years has been a great resume builder and the ability to network at the competition has led to jobs for many of our team members.”

Team Minion plans to compete in RobotX again in 2020, and so looked at worked well this time out, and what they want to try in the future. At its heart, their seacraft is a combination of both hardware and software. As Eric Coyle, one of the team leads describes it:

“Team Minion built its software tasking system to only decide to attempt a task once all the required task elements have been detected and identified. Between tasks, the system searches the area for these cues, which are typically floating objects the unmanned boat must interact with by maneuvering in a specific manner or identifying characteristics of the object.

Most teams built their software solutions on a more scripted sequence of events, which requires more pre-determined information, and is not always as resilient to changing conditions.”

In terms of competitiveness, Team Minion also found that hardware had an outsized effect. The reliability of their solution impacted their competitiveness by determining how often they could test, collecting data to better tune their software algorithms. More tuning and testing supported their software and sensor approach, allowing them to better adapt to unexpected situations.

Reacting to those situations requires sensor data. “Most tasks could not be fully completed without vision-based knowledge,” says Eric, “our perception system relied on range measurements to detect and perform initial identifications of objects, but then vision was used to confirm patterns and color indicators necessary to complete the tasks.” Team Minion used visible light solutions at competition, but are now integrating a thermal solution to address some of the detection and classification issues they had.

In 2020, they plan to expand their vision suite to include a larger camera array with both visible and thermal imaging as well as HDR imagery techniques. They plan to build on their initial successes with bringing deep learning into their vision processing.

The plan for 2020 also includes integrating multiple unmanned systems, leading to a fully capable unmanned boat, submarine and possibly even a unmanned aerial vehicle. While Eric is clearly proud of the technology they built, he’s clear that it was not the decided factor: “ultimately it was the dedication and strength of our team members that made us competitive and ultimately successful.”

The Robotics Association at Embry-Riddle (RAER) is a student organization that is pushing the boundaries of what is possible in unmanned systems. RAER supports seven collegiate robotics teams at the Daytona Beach Campus that compete around the world, across the domains of land, sea and air. RAER also provide outreach and support to K-12 students in the community, inspiring them to pursue their own paths through STEM education.

You can learn more about Minion and the talented team that put it together at www.eraurobotx.org.