Even with the holidays behind us (the seasonal peak in consumer retail/on-line spending, logistics and transport, manufacturing, and distribution), there are still more than 5 billion barcodes are scanned every day. Considering that the first barcode was scanned in the 70s on a packet of chewing gum, it’s clearly a formidable method of providing machine-readable UPC (Universal Product Code) that has evolved relatively little since. The systems that identify and decode barcodes on the other hand have come a long way and continue to advance to offer faster, smaller, cheaper and more robust readers.

As for all successful innovations, they are born from necessity and enabled by an idea and a solution. The idea for a UPC traces back many decades before the first commercial code was scanned as well as the solution, patented by Bernard Silver and Norman Joseph Woodland. Woodland first came up with the ideas for the barcode symbol, based on Morse Code. According to Smithsonian Magazine, Woodland was sitting in a beach chair and pondering the challenge of making it easier to identify and catalog groceries in the supermarket in order to move people through the lines more quickly. He needed a code that computers could recognize. Morse came into his head:

I remember I was thinking about dots and dashes when I poked my four fingers into the sand and, for whatever reason—I didn’t know—I pulled my hand toward me and I had four lines. I said ‘Golly! Now I have four lines and they could be wide lines and narrow lines, instead of dots and dashes. Now I have a better chance of finding the doggone thing.’

The original patent was actually in the form of concentric circles of varying thickness bands, but the UPC barcode symbol commercialised in the 70s resembled the familiar 1D barcodes still used today. Such was Woodland’s influence that when he passed away in 1971, MAD Magazine ran a special isssue in his honor.

Gareth Powell is a Strategic Marketing Manager with Teledyne e2v

Printing technology has evolved to enable ever smaller UPCs but reading technologies have evolved from electro-mechanical scanning using lasers and photo-multipliers to imager-based systems that capture and process images. While 1D laser based scanners are still manufactured and deployed, the most significant advances in the reading system came from the invention of 2D imager based readers. An imager based reader can read 1D barcodes in any orientation (not the case for uni-directional laser based systems) but also enabled the evolution to two dimensional matrix based barcode symbols.

This reader technology transition began around 15 years ago but now represents the majority of today’s market, estimated to be in excess of 35 million scanners manufactured per year. The 2D barcode in its various forms offers a significant increase in code-able data versus the traditional 1D – typically 1D barcodes can have from 20-25 characters while 2D codes go beyond 2,000 characters depending on the specific barcode type. Apart from the obvious ability to store greater product info and details, check-sum and other error correction techniques can be coded in 2D barcodes to ensure increased tolerance to poorly printed or damaged codes.

How do they work?

Bar code symbols encode strings of data or the key to data in a database: 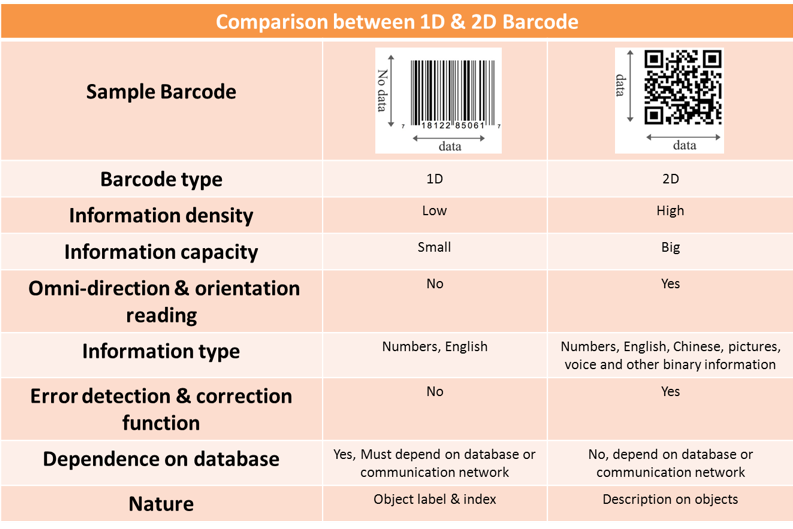 Teledyne-e2v image sensors are unique in this market offering benefits over other 2D sensor options. This comes largely from the fact that they are specifically designed for barcode reading applications as opposed to more general purpose, consumer or automotive applications. In part 2 we will elaborate on the fact that “not all 2D barcode scanners are created equal.”

“In engineering, there is always something to massage”