In 1945, after the advent of the atomic bomb, Robert Oppenheimer said the creation brought to mind the words of the god Vishnu from the Bhagavad Gita: “Now I become Death, destroyer of worlds.”

In the original Sanskrit, the word “death” may have been better translated as “world-destroying time.”

One wonders if Vishnu had been practicing on Venus.

At first glance, the second planet from the sun looks a lot like earth. It has a similar size, gravity and mass, and is wrapped in a thick atmosphere. Studies have suggested that Venus once had an atmosphere that was similar to Earth’s, with liquid-water oceans and habitable surface temperatures. But today, Venus is nightmare incarnate. Swirling clouds of carbon dioxide hide its surface, runaway greenhouse gases that long ago heated the planet to the point where all its water vapor evaporated. It rains sulphuric acid. The surface temperature is 864 degrees Fahrenheit, hot enough to melt lead. And if the heat doesn’t get you, the pressure will. The atmospheric pressure on the surface of Venus is 92 times that of the surface of Earth, pushing down at about 1,350 pounds per square inch, or the equivalent of being 3,000 feet below the surface of the ocean. Even though Venus is the planet most similar to Earth in our solar system, this is why humanity has long focused its attention on Mars. Compared to its bigger sister, Mars is a freezing, barren red rock with little atmosphere. Our robots can roam its surface, only having to deal with cold temperatures and radiation. We can imagine living there, if not easily. Venus is not so hospitable.

The Russians found this out the hard way. For 23 years, the Soviet Union tried to send probes to the surface of Venus. Each one met a gruesome fate, with the most successful operating on the surface for two hours and seven minutes.

When the Americans decided they were going to the moon in the 1960s, the Soviets figured they’d head to Venus.

The Venera (Russian for Venus) program lasted from 1961 to 1983, with 16 official missions and a variety of other false starts. The first—Venera 1—was lost en route to Venus. Venera 2 lost communications right before it arrived at the planet. Venera 3 is thought to be the first human object on another planet, as it crashed on the surface on March 1, 1966.

Venera 7 was the first probe to successfully land on the surface of another planet, in December 1970. It survived for 23 minutes before, presumably, being crushed and melted to slag. Venera 8 landed in 1972 and lasted for 50 minutes.

Venera 9 sent back the first pictures of the surface of another planet, black and white photos, before succumbing to the environment after 53 minutes. Venera 10, 11 and 12 also made it to the surface and lasted between 65 and 110 minutes, though camera and sensor malfunctions limited the data they sent back.

In 1982, Venera 13 sent back the first color photos of the surface of Venus and took soil samples, discovering leucite basalt. The mission was the most successful in the program, lasting for 127 minutes. Its sister lander—Venera 14—landed four days later and collected soil samples as well. 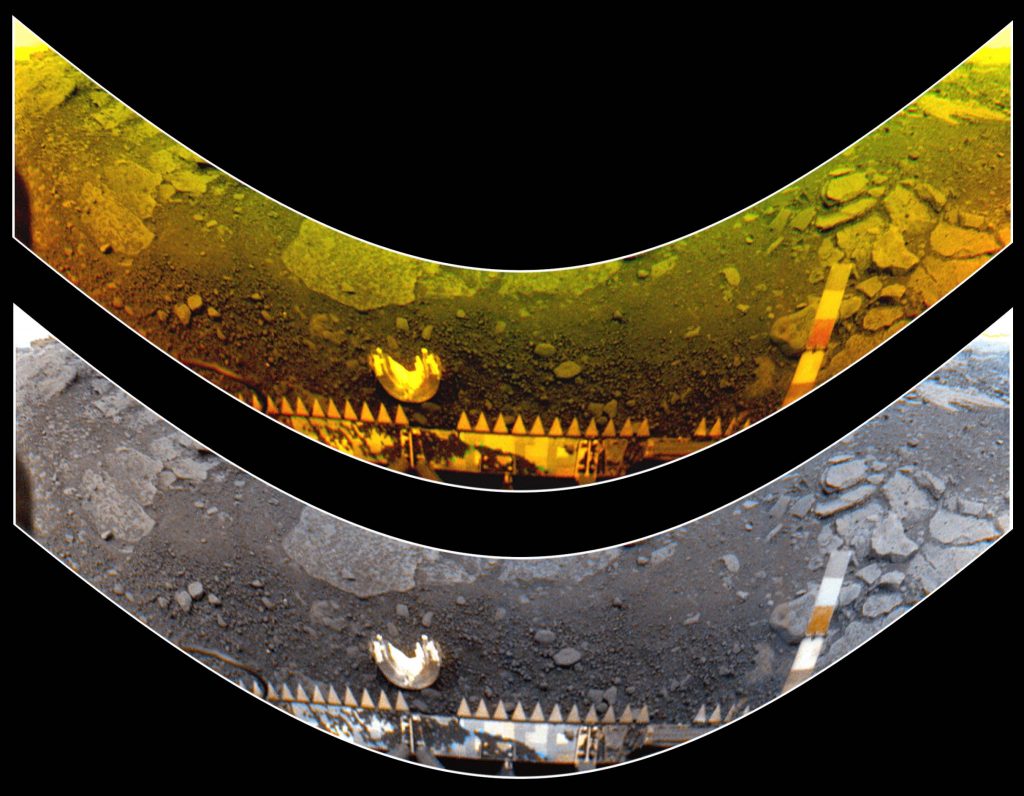 These are geometrically-corrected edits of the panoramas captured by Venera 13 in 1982. Two optical-mechanical cameras repeatedly scanned 180° or 60° of the surface of Venus through clear and colored filters. Image via Russian Academy of Science

Venera 15 and 16 were orbiters that mapped the planet’s northern hemisphere.

Overall, the Venera missions were hugely ambitious and set several precedents for interplanetary exploration. And while Venus ate them all in quick order, sometimes a few probes need to be sacrificed to Vishnu in the name of science.

Subsequent missions to Venus has tended to stick to the relatively safety of orbit.

How Teledyne has Helped Study Venus

Teledyne and its subsidiaries have taken part in more than 40 missions to study the solar system, including Earth, with more scheduled to launch over the next decade. Teledyne has helped study Venus twice, first in 2005 with the Venus Express mission launched by ESA, then again in 2010 with the “AKATSUKI” (PLANET-C) mission launched by Japan Aerospace Exploration Agency (JAXA).

The Venus Express was modeled after the similar Mars Express (launched by ESA in 2003, with Teledyne also on board). The satellite achieved orbit around Venus in 2006 and, with continued mission extensions, took readings of the planet until its fuel was exhausted in 2014. Teledyne e2v contributed its CCD47-20 chip for sensors onboard the Venus Express, used for spectroscopy on the planet’s atmosphere. 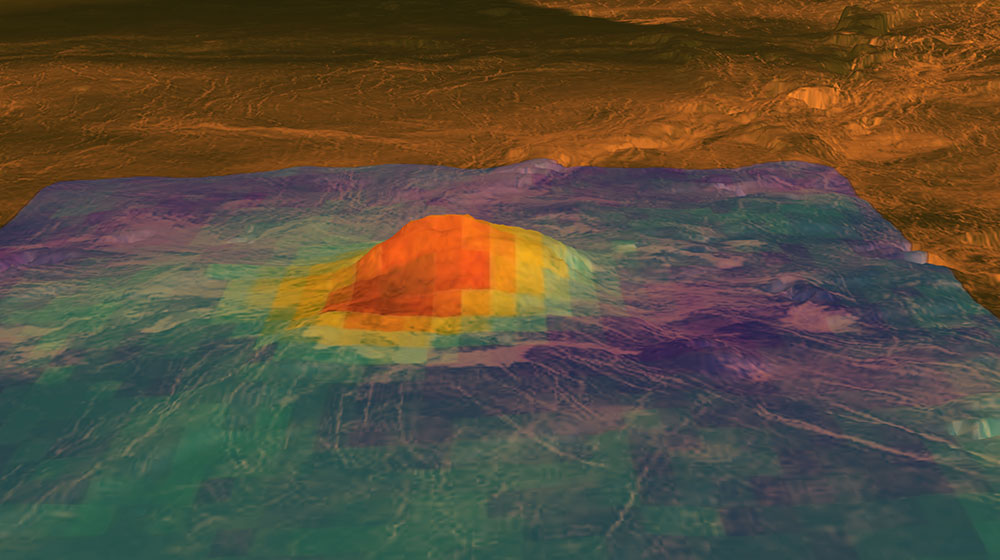 Venus Express was the first probe to find possible evidence of past oceans on Venus, giving us the indication that the planet has not always been the clouded inferno that we know today. It also was the first to provide a temperature map of the southern hemisphere and discovered that a massive double atmospheric vortex exists at its south pole.

The Akatsuki mission was launched in 2010, though due to an error at its first attempt to attain orbit, did not begin observing Venus until 2015 (after five years orbiting the sun waiting for a second chance). Akatsuki—Japanese for “dawn”—is essentially a Venusian weather satellite, observing the planet’s atmosphere from an elliptical orbit ranging from 300 to 80,000 kilometers above the surface. The observatory has five primary instruments to observe wavelengths from ultraviolet to long-wave infrared. It has two near-infrared cameras (one each for one micrometer and two micrometer wavelengths), a long-wave infrared camera, an ultraviolet camera, and a visible spectrum camera used to measure the glow of the planet and look for lightning strikes. Teledyne e2v contributed its CCD47-20 sensor to the ultraviolet camera.

Akatsuki includes five cameras that allow for imaging at various wavelengths between ultraviolet and long-wave infrared, allowing it to capture details from highly reflective clouds in the upper atmosphere all the way down to the surface. Image via JAXA.

Speculation about Venus persists. The surface may be a hellscape, but the atmosphere is fascinating. The upper atmosphere of Venus (about 50 to 65 kilometers from the surface) is very similar to that of Earth’s, replete with oxygen and nitrogen. That particular area of the atmosphere has a peculiar habit of absorbing ultraviolet light, a mystery that has led to questions about potential life within the Venusian atmosphere, such “extremophile” bacteria such as what might be found around deep-sea volcanic vents on Earth. Researchers thought they may have found phosphine gas in the atmosphere, a biomarker that could signal the existence of some kind of life, though that claim has since been disputed.

NASA thinks Venus is worth another look. In June 2021, it announced that two Discovery missions were headed to the planet to study the atmosphere and surface, dubbed VERITAS and DAVINCI+.

NASA’s latest missions to Venus were selected among four proposals for the next Discovery missions (including the IO Volcano Observer and TRIDENT, a mission to Neptune’s moon Triton). The missions will launch somewhere between 2028 and 2030 and will be NASA’s first trips to Venus since 1978.

DAVINCI+ (Deep Atmosphere Venus Investigation of Noble gases, Chemistry, and Imaging) will study the atmosphere and unique geological features of Venus. According to NASA, DAVINCI+, “will measure the composition of Venus’ atmosphere to understand how it formed and evolved, as well as determine whether the planet ever had an ocean. The mission consists of a descent sphere that will plunge through the planet’s thick atmosphere, making precise measurements of noble gases and other elements to understand why Venus’ atmosphere is a runaway hothouse compared the Earth’s.” 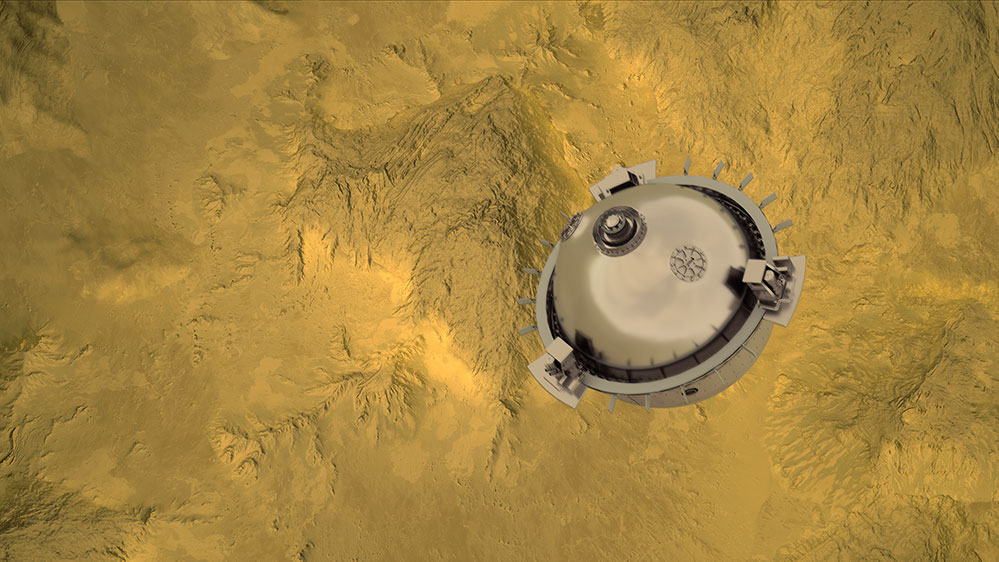 DAVINCI+ will send a meter-diameter probe to brave the high temperatures and pressures near Venus’ surface to explore the atmosphere from above the clouds to near the surface. Visualization via NASA GSFC.

VERITAS (Venus Emissivity, Radio Science, InSAR, Topography, and Spectroscopy), “will map Venus’ surface to determine the planet’s geologic history and understand why it developed so differently than Earth. Orbiting Venus with a synthetic aperture radar, VERITAS will chart surface elevations over nearly the entire planet to create 3D reconstructions of topography and confirm whether processes such as plate tectonics and volcanism are still active on Venus.” 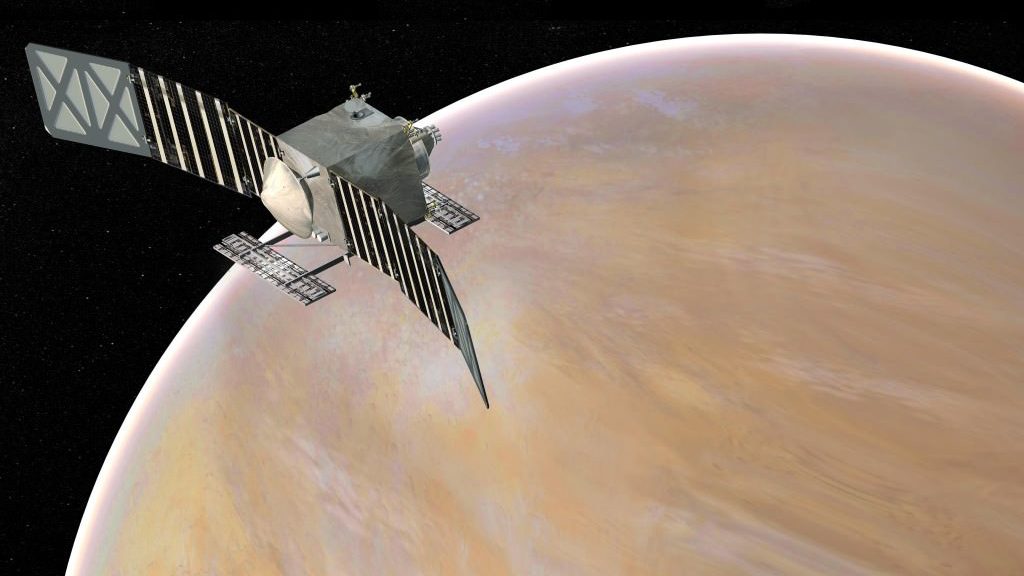 VERITAS would produce global, high-resolution topography and imaging of Venus’ surface and produce the first maps of deformation and global surface composition. Image via NASA/JPL-Caltech

Though not included in the VERITAS and DAVINCI+ missions, researchers at NASA’s Jet Propulsion Lab have studied the possibility of a rugged robot that could survive the surface of Venus for more than a year. Called the “Automation Rover for Extreme Environments” (AREE), the design consists of analog mechanisms coupled with high-temperature electronics.

Russia is thinking about going back to Venus with the proposed “Venera-D” mission that could launch somewhere between 2029 and 2031. The “D” stands for “dolgozhivushaya,” which means “long lasting” in Russian, and would include a surface probe that could survive on the surface longer than its ancestors.

How Venus Helps Us Understand Earth

Venus is the cautionary tale for Earth, a planet that may have once contained water and even life, turned into a roiling hell through runaway greenhouse gases. Understanding how Venus formed and the peculiarities of its atmosphere and history will give us a better idea of how planets form and evolve.

Given that extensive observations from the surface are basically impossible, most of what we learn about Venus must come via imaging from orbit.

“It is astounding how little we know about Venus, but the combined results of these missions will tell us about the planet from the clouds in its sky through the volcanoes on its surface all the way down to its very core,” said Tom Wagner, NASA’s Discovery Program scientist about the VERITAS and DAVINCI+ missions.

“Scientists long have theorized that Venus formed out of ingredients similar to Earth’s, but followed a different evolutionary path,” NASA stated. “Measurements by NASA’s Pioneer mission to Venus in the 1980s first suggested Venus originally may have had an ocean. However, Venus is closer to the sun than Earth and receives far more sunlight. As a result, the planet’s early ocean evaporated, water-vapor molecules were broken apart by ultraviolet radiation, and hydrogen escaped to space. With no water left on the surface, carbon dioxide built up in the atmosphere, leading to a so-called runaway greenhouse effect that created present conditions.”

Earth, of course, is dealing with its own carbon dioxide build up and greenhouse gas effects. The more carbon dioxide that is released, the more of it is absorbed by the oceans, heating the water and the atmosphere, leading to more extreme weather. Fear exists that the warmer the oceans get, the more potential there is for untapped sources of carbon dioxide and methane to be released as the oceans wear away the caps holding those gases.

In theory, Venus is the prototype for the potential of what could happen on Earth. What better place to study runaway greenhouse gas effects than a planet that has already experienced it?

Looking at Mars With the Right Kind of Eyes