There are eight planets in our solar system: Mercury, Venus, Earth, Mars, Jupiter, Saturn, and Uranus. But at one time, there were 9. On February 18, in 1930, an astronomer named Clyde Tombough discovered what was originally called planet Pluto. When a group of scientists came together in 2006 to formalize the definition of a planet, Pluto was reclassified as a dwarf planet. According to the International Astronomical Union, a planet is classified as a celestial object that “is in orbit with the sun, has sufficient mass to have a nearly round shape, and has cleared the neighborhood around its orbit”. Unfortunately, Pluto did not meet the third criteria, as it resides in what was later discovered to be the Kuiper Belt – a large collection of icy bodies and mysterious small objects, which orbit beyond Neptune. Think of this region outside of our solar system as a donut-shaped asteroid belt, but 20 times as wide and 20 to 200 times as massive. The Kuiper Belt is also known as the “third zone” of our solar system.

Little is known about Pluto and the other celestial bodies that comprise the Kuiper Belt. Scientists have theorized that there could be as many as 100, 000 objects larger than 100km in diameter within the Kuiper Belt, and a trillion or more comets. Several of the dwarf planets within the belt also have moons. Pluto, for instance has five moons: Charon, Hydra, Nix, Kerberos, and Styx. And while we don’t know much about the icy worlds and comets in this cold, distant region of space, scientists are taking on the challenge of exploring the Kuiper Belt to unravel the mysteries of the “third zone” of our solar system.

The New Horizons spacecraft was engineered by the Johns Hopkins University Applied Physics Laboratory (APL) and the Southwest Research Institute (SwRI) as part of NASA’s New Frontiers program. Its main mission was to perform a flyby of the Pluto system in 2015, with a secondary mission to study Kuiper Belt objects (KBOs). New Horizons was launched on January 19, 2006 at Cape Canaveral Air Force Station by an Atlas V rocket. A few years after launch, on July 14, 2015, New Horizons became the first spacecraft to explore Pluto.

To learn more about the surfaces, atmospheres, and space environments of Pluto and the KBO, New Horizons uses imaging in the visible and infrared, spectral mapping, ultraviolet (UV) spectroscopy, radio science, and in situ plasma sensors. 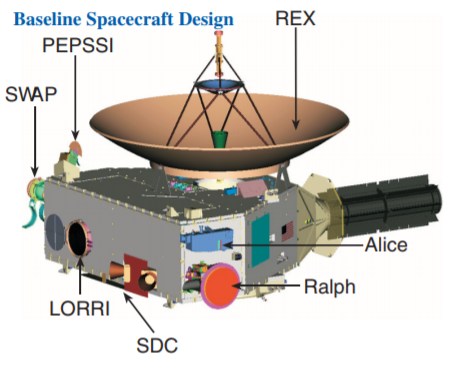 Teledyne e2v has provided New Horizons with two specialist image sensors. The Long-Range Reconnaissance Imager (LORRI) is a black and white telescopic camera that has a 1k x 1k pixel image sensor at its core, CCD47-20. The other sensor, CCD96, powers Ralph – a 5k wide multi-colour scanning imager. New Horizons travels at 33,000 miles per hour, and the Kuiper Belt objects do not reflect a lot of light; therefore, the image sensors have been designed to be extremely sensitive and to work perfectly during its short flybys.

Since its launch, the New Horizons spacecraft has given astronomers insights to the icy mountains and flowing ice of Pluto, the various surfaces of Pluto’s five moons, and Pluto’s blue atmosphere. The spacecraft’s LORRI camera had captured a close up of the geologic activity of what appears to be ice flowing across Pluto’s surface – similar to that of a glacier on Earth.

After New Horizons’ six-month long reconnaissance flyby study of Pluto in 2015, the spacecraft has moved on to its extended mission. It will travel further into the Kuiper Belt, and perform a flyby of the object 2014 MU69, also known as Ultima Thule.

On January 1, 2019, New Horizons will be the first to explore the most distant target ever visited by a spacecraft. New Horizons will zoom in on Ultima Thule at 32, 000 km/h to get a closer look. The flyby events will take place from December 29, 2018 to January 4, 2019 at the base of New Horizons operations, Johns Hopkins University Applied Physics Laboratory (APL) in Laurel, Maryland.

Ultima Thule is believed to be a frozen relic from the birth of our solar system, and is the size of a 37 kilometer-wide city. The flyby happening on the first day of 2019 will be a historic event that will give us more insight on the objects beyond the eight major planets of our solar system.