Just three months after the Berlin Wall fell, two mutually suspicious groups met in Ottawa, Canada. These groups, representatives of NATO and Warsaw Pact countries, were there to discuss an idea that had failed 35 years before: an agreement about trusting each other. First proposed by President Eisenhower to Soviet General Secretary Nikita Khruschev in 1955, the idea now was to allow treaty signees to conduct unarmed reciprocal surveillance overflights of each other’s territory. The goal was to reassure each country that they had nothing to hide – particularly plans to attack the others.

On March 24, 1992, 24 countries signed the Open Skies Treaty, with the Treaty entering into force on January 2, 2002 once it was ratified by Russia and Belarus. The Treaty permits an annual quota of overflights by observation aircraft equipped with cameras, an infrared imaging system, and synthetic aperture radar. Recorded data is available to all signatories. Treaty members verify items of concern to them such as military installations, missile sites, commercial factories, large troop and weapons build-ups, that could become a potential threat. Today there are 35 party states to the treaty and there have been more than 1,200 overflights.

Teledyne has a long history in enabling Earth Observation (EO) missions for ESA, NASA, JAXA and other space agencies to acquire observations of the Earth’s surface and atmosphere via remote sensing instruments. With aerospace technologies continually, evolving, remote sensing and digital data collection applications are increasing in Low Earth Orbit (LEO) and  to airborne platforms.

In the United States, the U.S. Air Force’s uses a OC-135B surveillance aircraft is available to conduct missions. The OC-135B is based on a modified Boeing body that was originally modified for collecting samples in the atmosphere to detect and identify nuclear explosions. The interior seats 35 people, including the cockpit crew, aircraft maintenance crew, foreign country representatives and crew.

Open Skies aircraft are allowed video, optical panoramic and framing cameras for daylight photography, infrared line scanners for a day/night capability, and synthetic aperture radar,  a form of radar that is used to create 2D images or 3D reconstructions of objects, in a variety of light and weather conditions.

Cameras currently in operation in U.S. Open Skies aircraft are all wet film cameras: one vertical and two oblique cameras, used for low-altitude (3,000 feet / 900 m) photography, and one panoramic camera, which provide a wide sweep at high-altitude (35,000 feet / 11,000 m). With so much of industrial and military imaging having gone digital, it is a stark reminder of the logistics that film requires: Seven commercial Norcold Tek II coolers with individual refrigeration units maintain temperature and humidity control to maintain peak film performance, capable of storing the 40,000 feet (12,000 m) of film a long mission might require.

All sensors used in Open Skies must be commercially available to all signatories, with imagery resolution is limited to 30 centimeters. These rules were defined to allow overflights to recognize military equipment (e.g., “is that a tank or a truck?”), creating transparency on the location and size of military forces and activities. Sensor categories and capabilities can only be improved by agreement among member states. Today, in the civilian world of survey and mapping and natural resource discovery, 20cm and even 10cm resolution has become the norm.

While the systems may not need to push the bleeding edge of performance, they must be tough. When the United States flew its first Open Skies mission over Russia in December 2002,  the flight had to deal with considerable extremes: the operating temperature at the Siberian airfield (at Ulan Ude) fell to -40⁰ F/C. Add atmospheric pressure and humidity changes and the occasional bumpy ride, these systems need to be built very durably to maintain the high level of precision they need to deliver.

More Than Military: The Multi-Role Benefit of Open Skies Capabilities

The U.S. government can also use Open Skies aircraft and personnel to support humanitarian and environmental missions. When Central America was devastated by Hurricane Mitch, a Category 5 hurricane, in 1998 – one of the most destructive hurricanes ever recorded in the Western Hemisphere. The Open Skies team assisted the United States Geological Survey (previously covered in their lidar imaging for disaster prevention) and the Center for Integration of Natural Disaster Information to determine the damage inflicted on the countries of Honduras, Nicaragua, El Salvador and Guatemala.

The U.S. Open Skies team also responded to short-notice requests for imagery following the enormously devastating tornadoes which struck the Oklahoma City area in 1999 and again in response to Hurricanes Katrina and Rita which ravaged the Gulf Coast region in 2005.

Technology advancements have made film cameras increasingly obsolete and, consequently, the United States is actively preparing for the transition to digital electro-optical sensors. Also, the Russian Open Skies teams had already moved to a digital imaging solution. There were concerns within the U.S. Air Force that while all Open Skies systems were limited to the same 30cm resolution, that digital imaging would allow post-processing to exceed that limit.

At the beginning of 2016, KIHOMAC was awarded a 3-year effort to replace and upgrade the current suite of camera sensors on the OC-135B. The Digital Visual Imaging System (DVIS) contract, valued at $36.6 million, was to replace the current film camera system with an entirely digital sensor, processing, and control suite. The KIHOMAC has completed the design, manufacture and installation of DVIS on one of the Open Skies aircraft and has installed a Digital Ground Processing System in the Open Skies Media Processing Facility at Wright-Patterson AFB.

To accomplish this mission, several factors need to be accounted for. The new system needs to work with the existing aircraft platform and succeed in the tough operating environments it will face around the world. Another factor is that the kind of film system it has replaced is actually quite good, proven in the field and with workflows already built around it. It is not just about changing the cameras, it’s all the systems in the air and on the ground that are affected.

One area that puts digital imaging systems far ahead of film systems is in the intelligence that can be built into the system. Image stabilization and motion compensation can be crucial in difficult situations, such as mountainous areas: high altitude can require higher flight speeds close to the ground, giving the imaging system scant time to resolve an image. 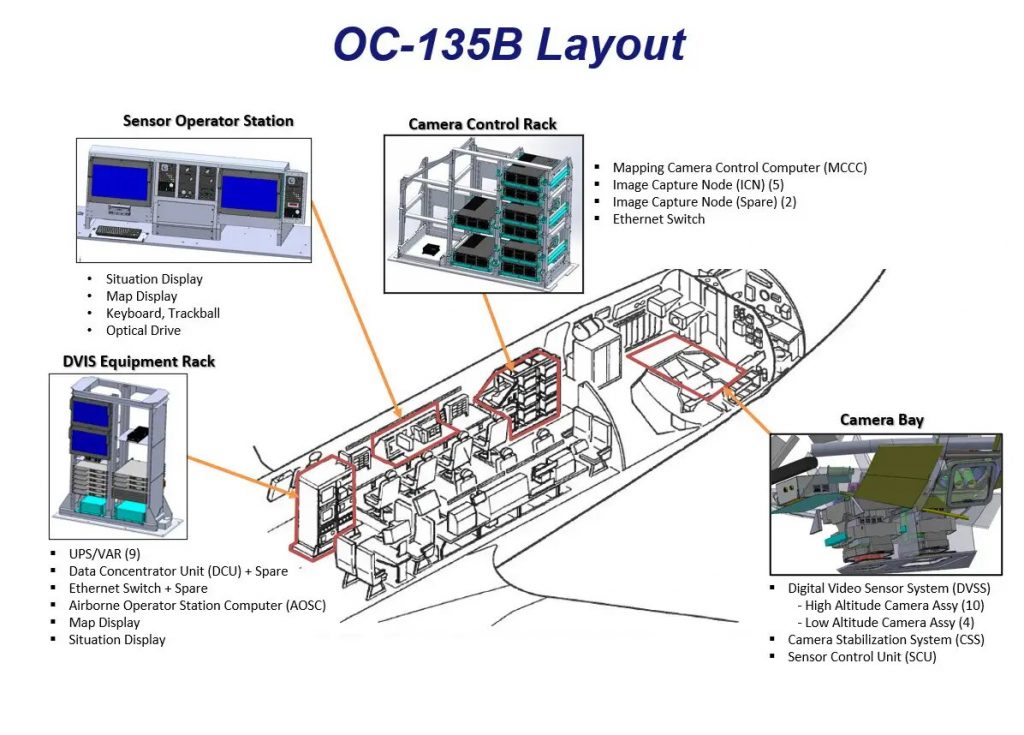 The layout of the DVIS system in the OC-135B Fuselage. Image courtesy of KIHOMAC 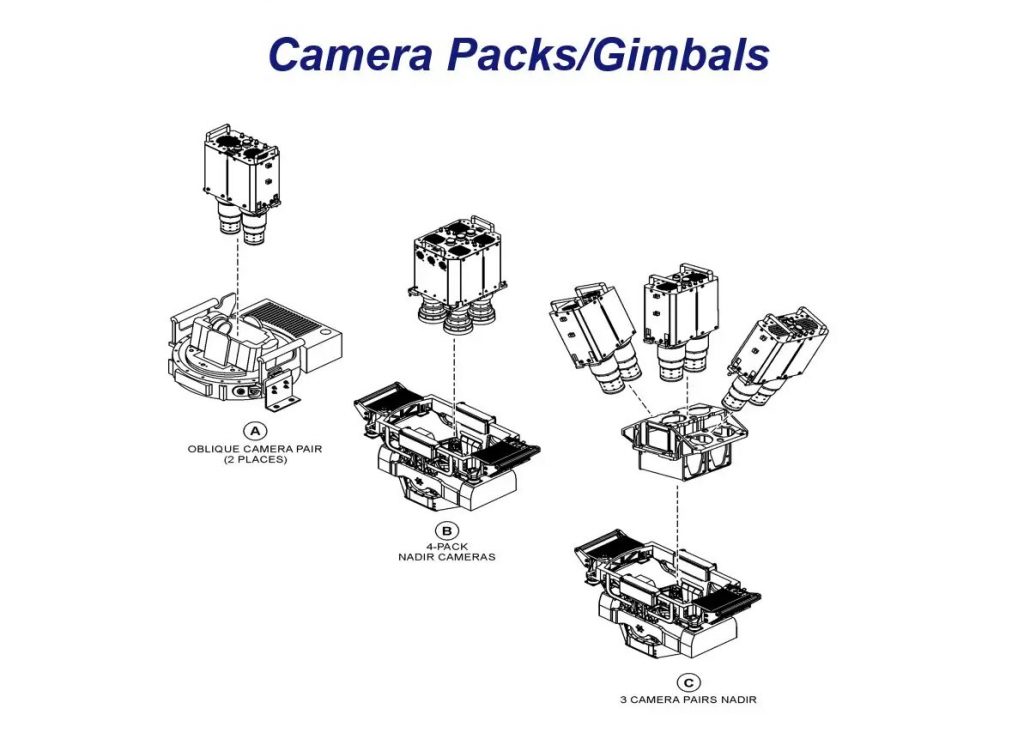 The camera packs and gimbals of the DVIS system. Image courtesy of KIHOMAC. 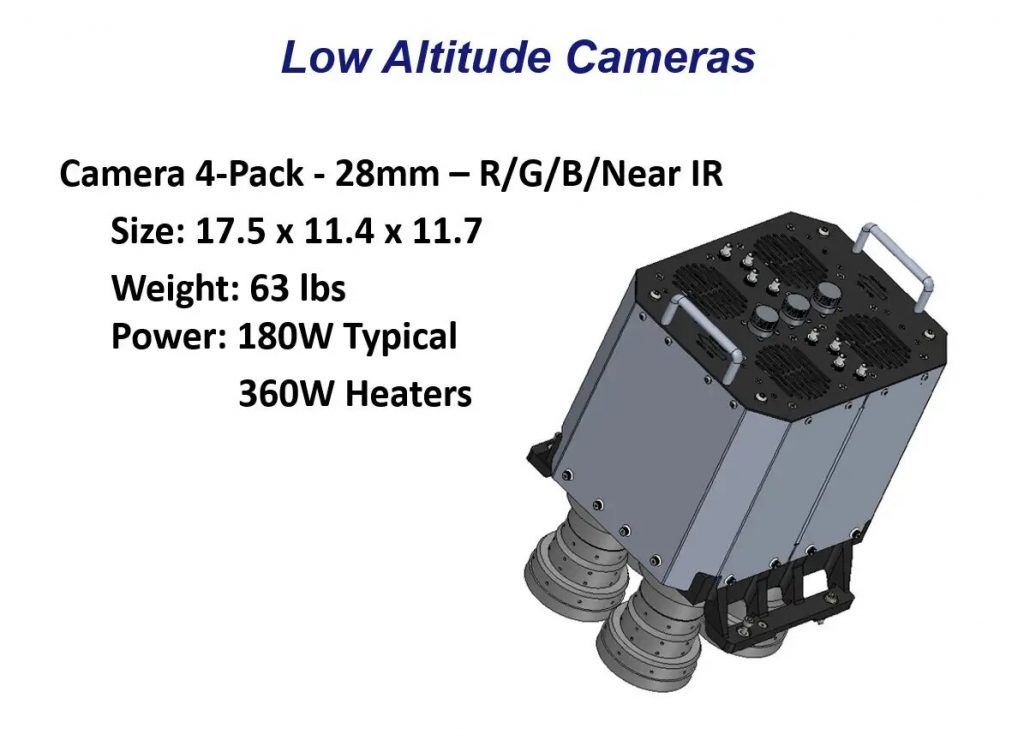 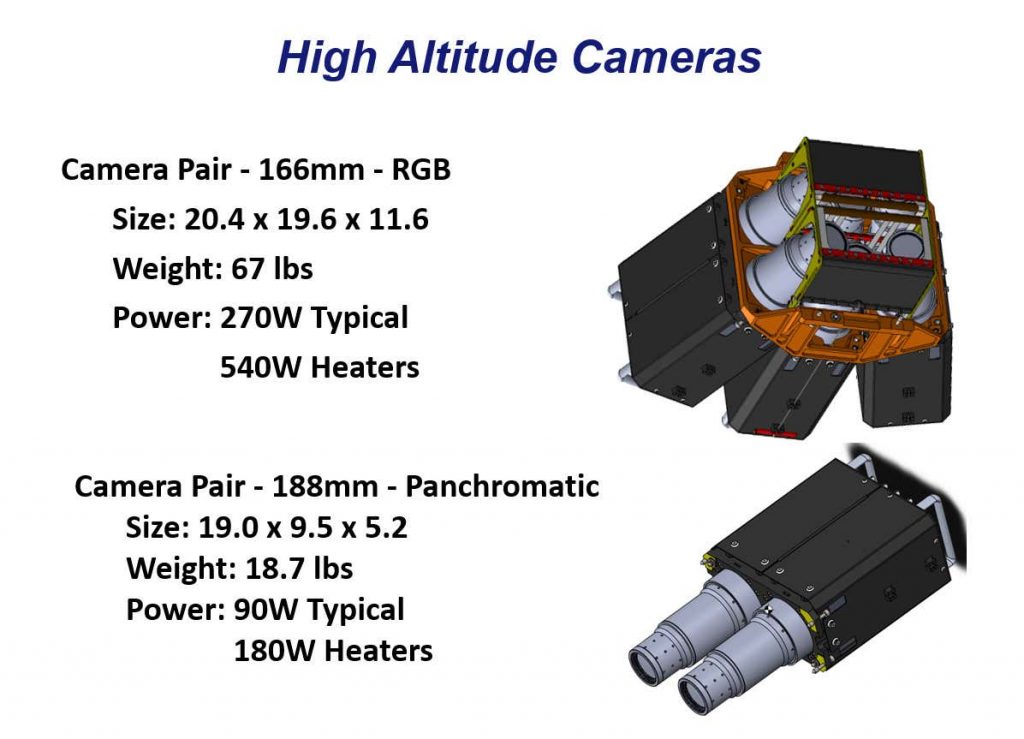 While the Open Skies requirements mean that this solution is limited to two frames per second, the camera itself, in other applications, is capable of 30x that speed to ensure overlap during high-speed surveys. The CM‐11K is also the only CMOS camera to offer patented Forward Motion Compensation with fully‐electronic shutter for maintenance‐free operation. A specialized piezoelectric drive integrated into the camera systems allows for continuous and precise sensor motion to ensure exact compensation of the aircraft’s forward motion. In this Open Skies configuration, this allows for low-light operation and minimal image smearing, even at high speed. The piezoelectric drive is a very delicate part, compensating for inertial measurement movement to ensure stable imaging. In the context of widely varying temperature, humidity, and air pressure, the system needed to be extremely robust, with custom shielding introduced by Teledyne Optech to bring the system close to the L-160 military standard for environmental conditions and test procedures for airborne equipment.

In May 2020, the Air Force approved a major milestone, “Milestone C”, indicating that development was complete and the system is now ready to enter into operational test.  However, on 22 May 2020, President Trump indicated his intent to have the US withdraw from the Open Skies treaty.  This action has put the DVIS program on hold.

The Value of Community, and An Uncertain Future

Today the future of the Open Skies Treaty is unclear. In 2018, the U.S. military announced it had conducted an “extraordinary flight” over unspecified areas of Ukraine while Russian and Ukrainian forces held dueling missile drills amid inflamed tensions. Russia’s Tu-214ON Open Skies aircraft were also reported to have taken off soon afterwards from Moscow, but it is unclear if it was on its own mission under the terms of the treaty.

Combined with uncertainty around Russia’s digital imaging system (which has since been approved by treaty participants), the U.S. government has been considering abandoning the treaty, arguing that Russia has abused its provisions. Still, it’s worth noting that, by the Air Force’s own admission, that the United States conducts more Open Skies flights each year than Russia does.

Supporters of the Treaty also point out that Russia and the United States are not the only two parties to the deal. Both countries have considerable satellite imaging capabilities that exceed the provisions of the Open Skies treaty.  The treaty is one of the few remaining avenues for arms control compliance verification that doesn’t rely on “national technical means”—a country’s unilateral ability to spy or observe from afar. Under Open Skies, many smaller countries to conduct their own overflights over their neighbor’s territory, offering them surveillance opportunities to monitor activity that would almost certainly be unavailable to them otherwise. Smaller countries typically do not have the benefit of intelligence, surveillance, and reconnaissance aircraft able to gather useful information from international airspace or ready access to high-fidelity satellite imagery of areas of interest. The agreement also gives member states big and small a powerful mechanism to demand oversight of their neighbors’ potentially provocative moves.

In 2020, we’ve seen that climate change, a global pandemic, and disappearing resources have all reinforced the idea that no country should—or can—go it alone. We’re all in this together. For 20 years, the Open Skies Treaty has shown that by supporting confidence through visibility and transparency, we can greatly ensure the security of everyone involved. Let’s hope that our future decisions continue to build in the successes of the past.