Are you: A problem solver by nature and enjoy taking on new challenges with enthusiasm? Innovative? Curious? Durable enough to withstand a 24-hour round the clock technology sprint with like-minded people? Perhaps you should consider taking part in a hackathon!

A design sprint-like event, Hackathons are a multi-day collaborative group competition where small teams form to work on a technology-based idea of concept which is generally outside the scope of their current day-to-day work. These types of events are often initiated by companies looking for an opportunity to uncover new talent and fresh ideas within their business. It’s a chance for everyone to stretch their skills and get outside of their daily rhythms. On the other extreme, standalone hackathon-style conferences like TechCrunch Disrupt can be massive events wherein not only bragging rights, but real money are on the table for the victorious team.

Since the first official event of  its kind in 1999, “Hackathons” have rapidly become identified by companies as a way to quickly develop new technology and isolate areas within to futher explore and cultivate with minimal overhead cost. This incubator-style approach of product, software or application development, has morphed into serious business: following the 2010 installment of TechCrunch Disrupt in New York, a messaging app called GroupMe was created, but did not win. Regardless, it was still sold to Skype the following year for a reported $43 to $68 million USD.

[ˈhakəˌTHän] n., an event, typically lasting several days, in which a large number of people meet to engage in collaborative computer programming. The goal of a hackathon is to create usable software or hardware with the goal of creating a functioning product by the end of the event. The word “hackathon” is a portmanteau of the words “hack” and “marathon”, where “hack” is used in the sense of exploratory programming, not its alternate meaning as a reference to computer security.

So, how does a hackaton actually work? Generally speaking, the company or group organizing such an event will make an announcement regarding specifics – where, when, what technology is in focus, rules surrounding team sizes, and potential winnings. A common misconception is that hackathons are for ‘coders’ only. Not the case.

These types of events strongly encourage multidisciplinary teams which not only include the need for specialized coding skills, but software developers, graphic and interface designers, project managers, and marketing personnel. The goal is to be the team who is able to present the best functioning and usable software or hardware of all the teams and ultimately, walk away as the winner.

Teledyne CARIS, a division of the Teledyne Imaging Group and world-renowned developers of both commercially offered and bespoke software solutions for hydrograpic mapping for over forty years, recently took its cue from this pervasive tech culture trend and held their first annual internal hackathon.

Running 24 hours straight from noon-to-noon on June 6 to June 7, seven teams with a total of twenty-four participants gathered to tackle the following challenge, create a project which incorporates at least one or more of the following elements:

At the end of the 24 hour period, teams had the opportunity to present their projects for consideration. Although all demonstrated much ingenuity, one team emerged victorious, “The Gesamtkunstwerk.” They were crowned overall champions of the inaugural event, electing to go the INNOVATE route. 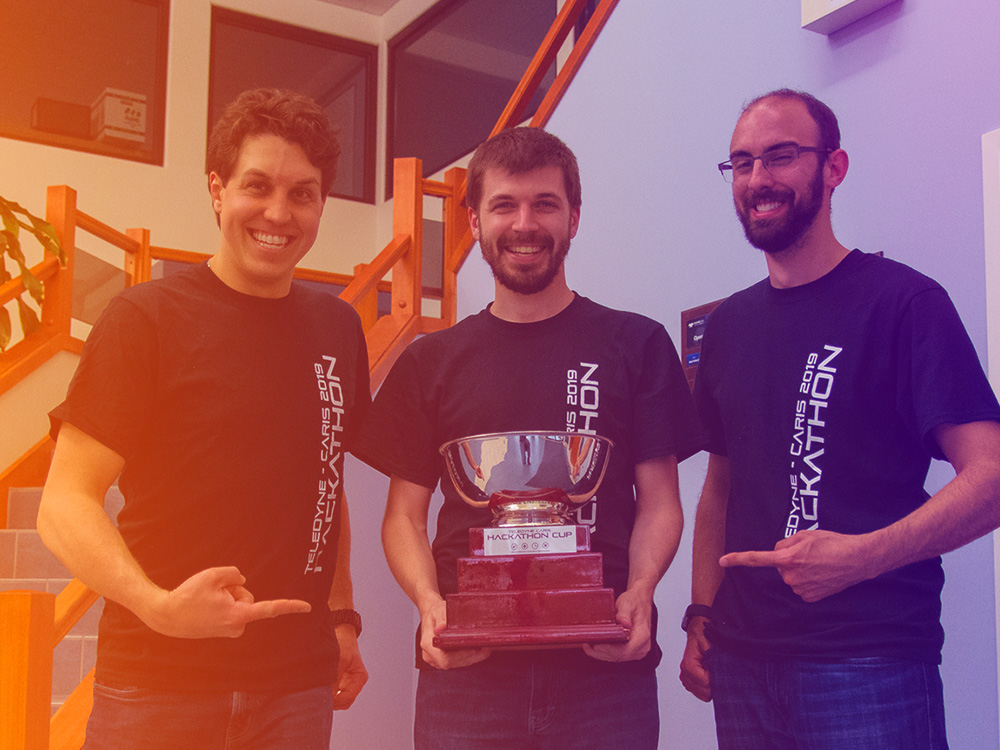 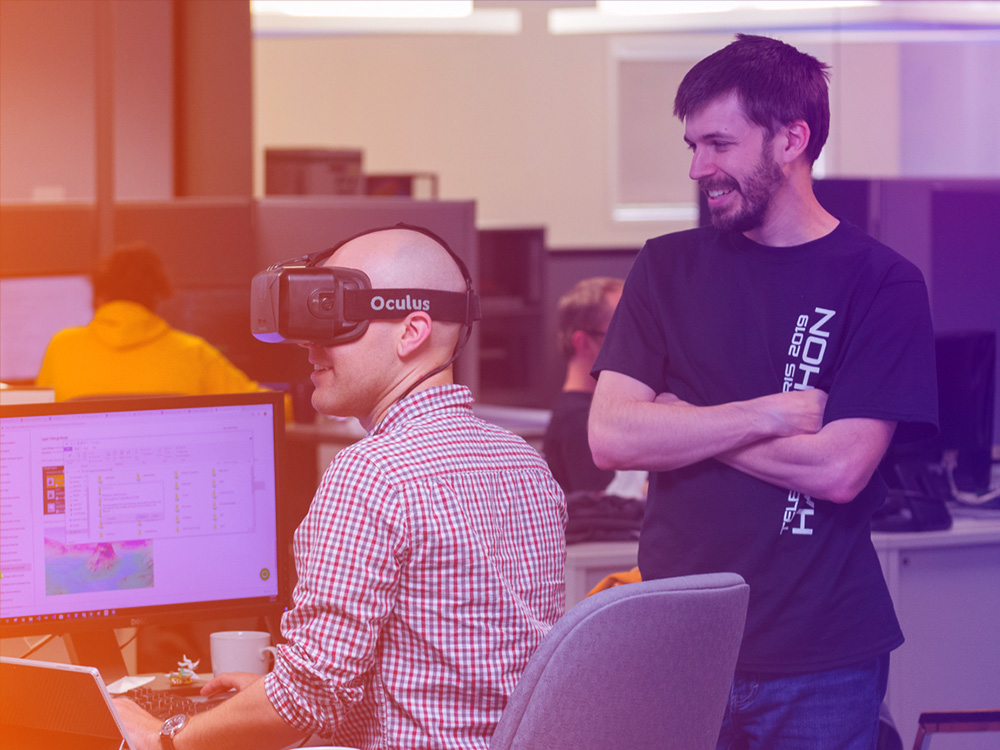 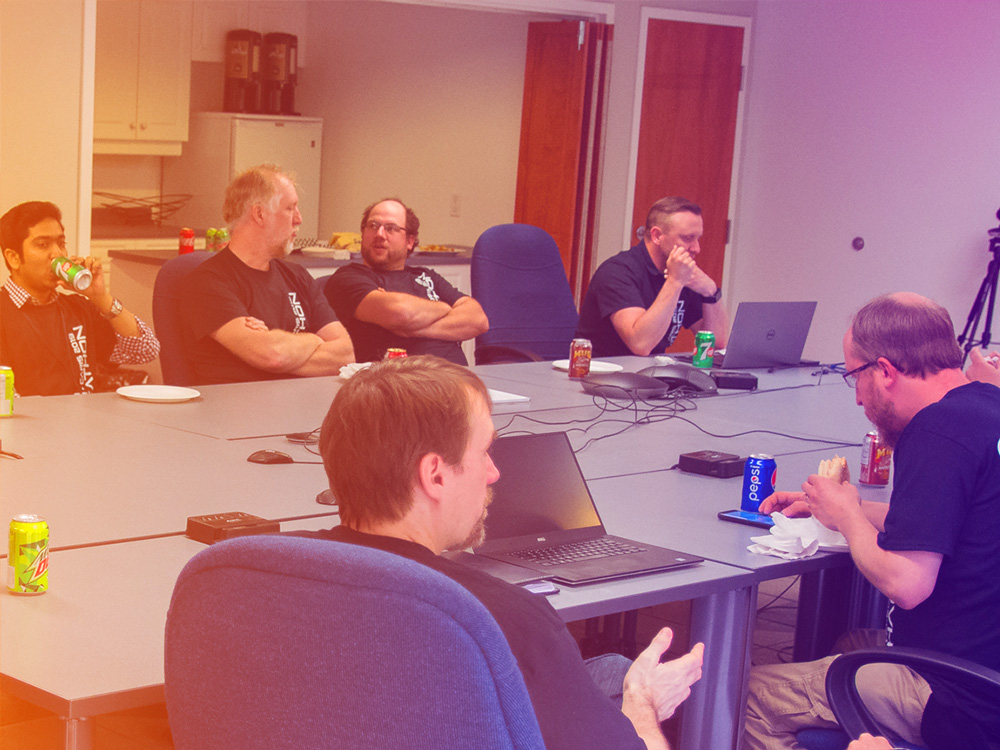 Discussion is just as important as work on the keyboard 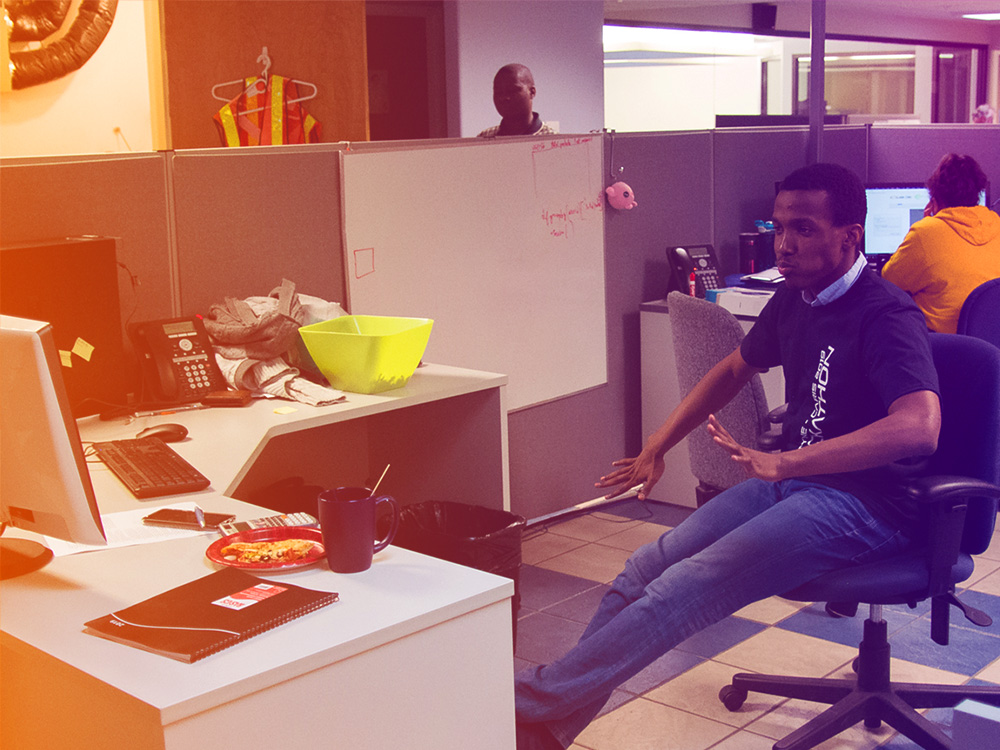 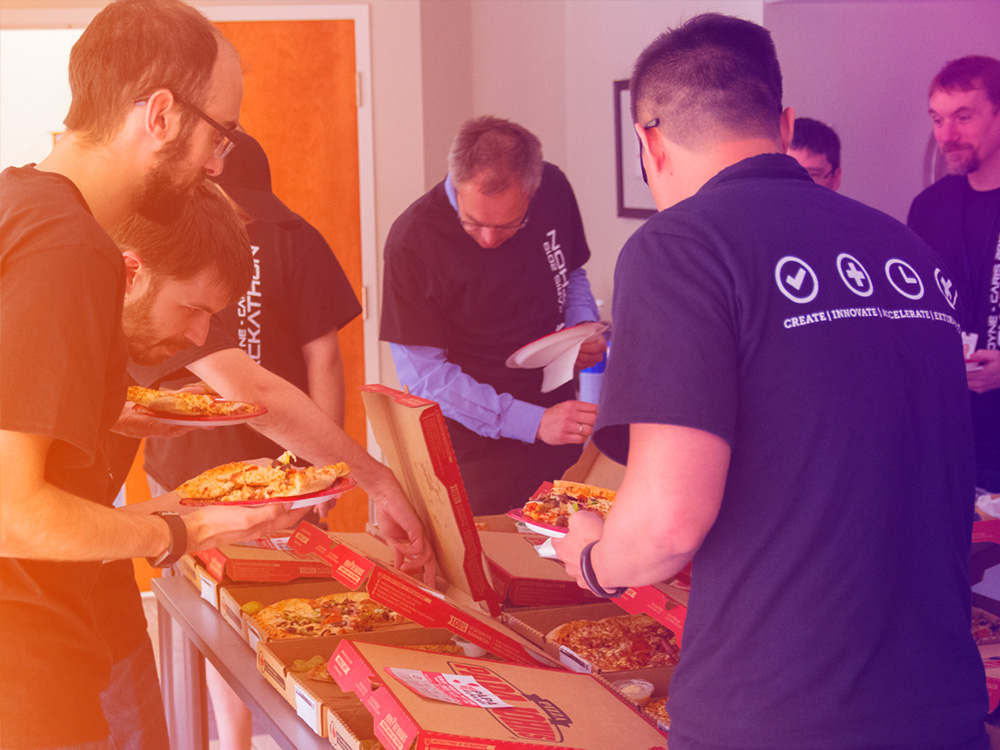 Pizza is a traditional - and essential - part of 24-hour hackathons

Software can be notoriously difficult to demonstrate and conceptualize as it can lack the tangibility factor that hardware does. Recognizing this could potentially be a stumbling block when presenting to potential clients, the team chose to explore a fresh, new, and exciting way to interact with hydrographic data collected through CARIS software.

Using the popular gaming engine called the Unreal Engine as a platform, Richard Ferguson, Johnny Stevens, and Marc Sormany imported data modelling of the ocean floor which, when combined with a well-known virtual reality headset called an Oculus Rift, allows the user to virtually “swim” around and experience the software capabilities in an enhanced and immersed 3D way. Trendy and technologically exciting, this approach lends itself to potential downstream applications for demonstrating CARIS software at trade shows, conferences, and presentations. It is fresh, engaging, and innovative, offering a very real and exciting way to interact with and highlight the value of CARIS software and enable users to spatially connect to its applications.

“The open nature of a hackathon provides a unique opportunity for team building and discovering synergies within the company which may have otherwise gone unnoticed. Teledyne CARIS is a dynamic software development company, always forward looking and focused on continuous improvement through innovative solutions,” Bill Lamey, VP of Product Development. “Our ability to grow and adapt to our customers’ needs is driven by our extremely talented workforce. The hackathon was a natural fit, giving creative minds a platform to contribute in new and exciting ways.”

Due to the overwhelming interest and success of this year’s hackathon, Teledyne CARIS has already begun plans for Hackathon 2020 in hopes that it becomes a truly annual event! 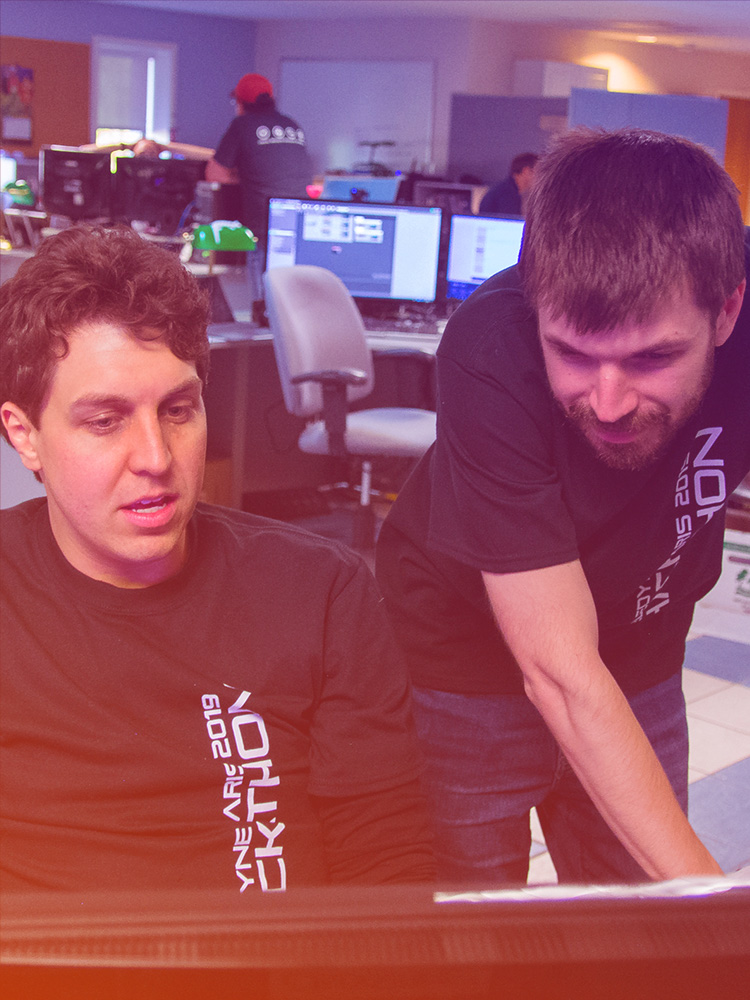 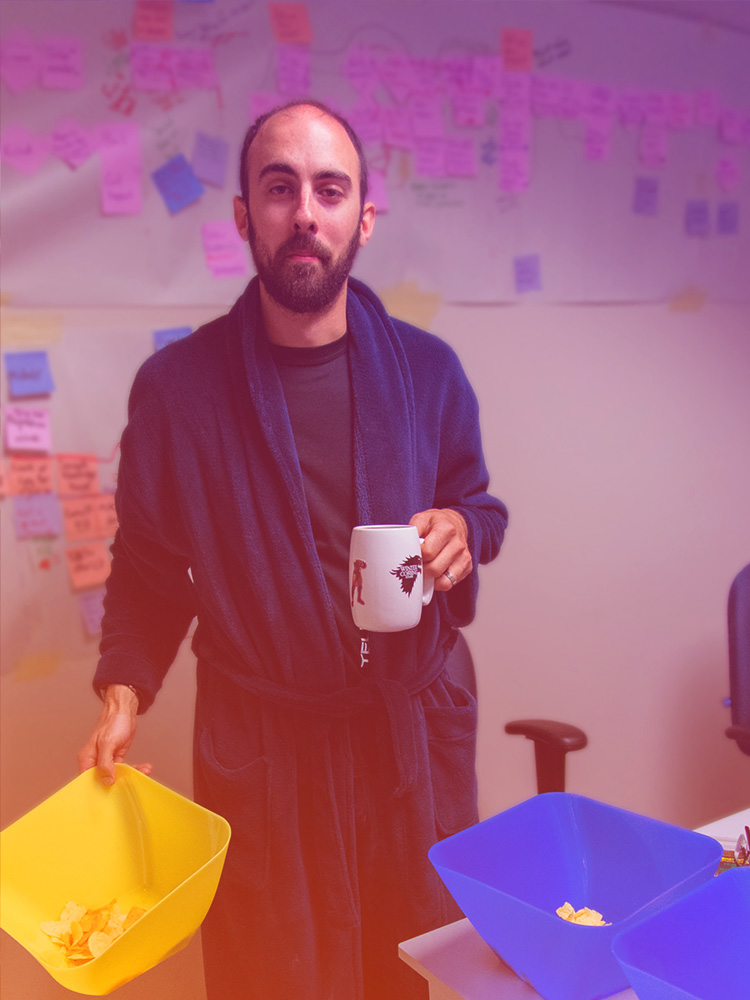 Richard Ferguson prepared for an all-nighter 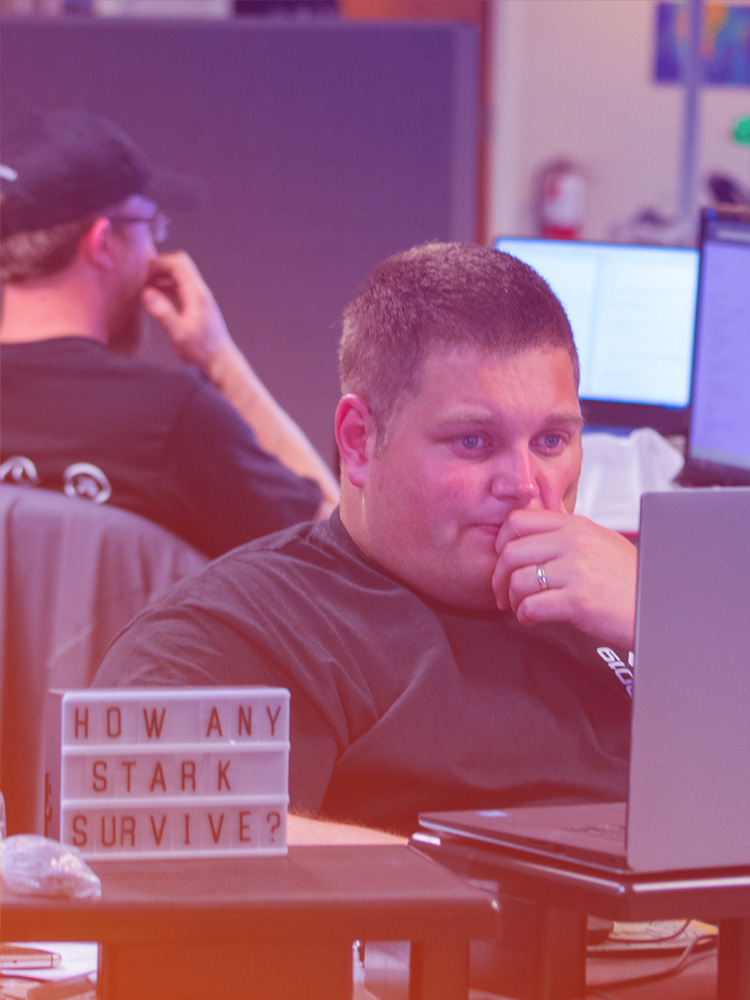 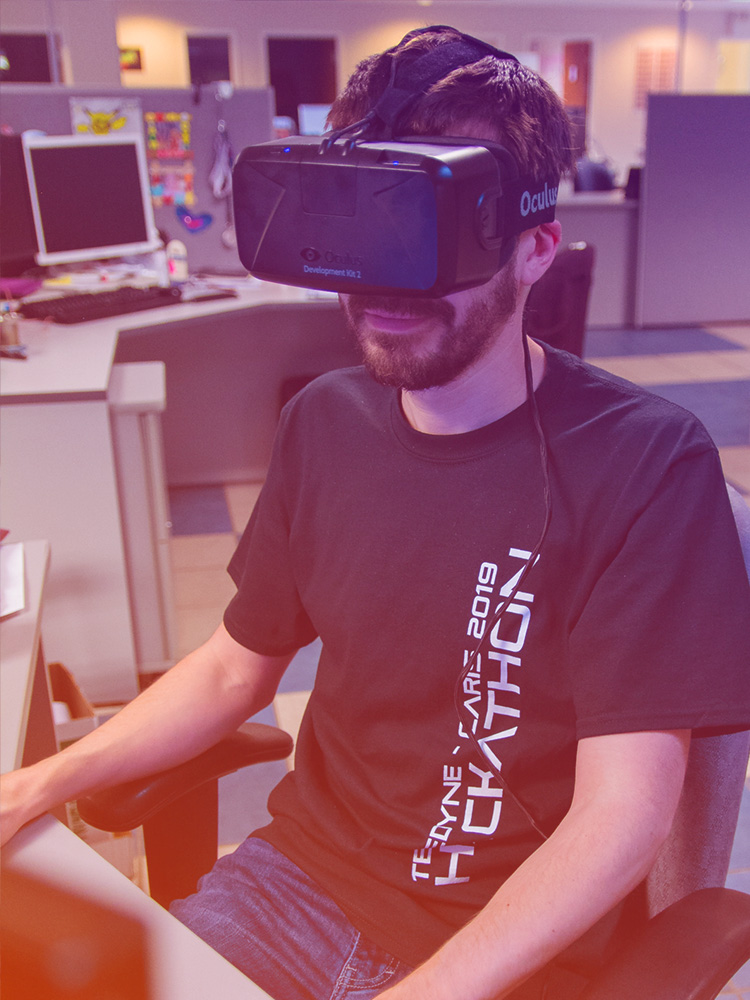 A Team of Minions Builds their Robot Leader